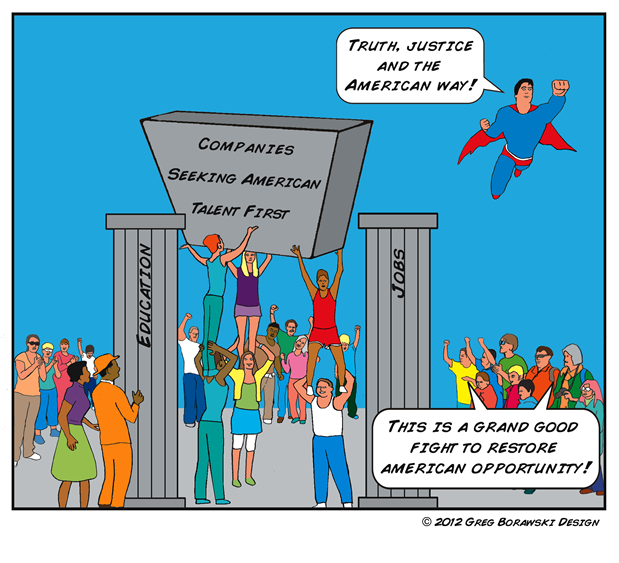 For 20 years, the hidden discrimination occurring in the tech industry has been tightly kept under wraps. Now it's been unraveled by American technical professionals through whistleblowing, suing, and reporting wrongdoing to the Department of Justice. Since a fine of $34 million has been levied against Indian giant Infosys, federal authorities are talking:

Brian Gray, a group supervisor in the Department of Homeland Security’s Homeland Security Investigations (HSI) unit and head of the Document Benefit Fraud Task Force (DBFTF) said, “We hope this will serve as a model for the other DBFTFs to follow, because this was kind of new territory for us to go through, and it was an educational process along the way,” Gray said. “We foresee that this will aid in the training of our customs and border protection counterparts there at the ports of entry, the consulates overseas that are issuing the visas, and educate them on how this matter started, and maybe what to look for.”

Ed Koranda, the DHS special agent who teamed with Department of State special agent Tim Forte to carry out the investigation in the trenches, stated, “I hope the success of this investigation will encourage other U.S. Attorney’s Offices to take these things on, because it does require, like Brian said, a great learning curve, and sometimes it’s a little intimidating. So I hope the fact that this was a success breeds other investigations.”

According to David Marwell, HSI special agent in charge in the Dallas Field Office, which oversaw the investigation, it already has.

“We are looking at other companies,” Marwell said. “This case has taken us in other directions. And there are other, what we call ‘spinoff’ cases, which we’re following up on. … We want other companies like Infosys to be on notice that we will be looking, and with proper predication and proper information, we will investigate practices and hold other companies that are doing this same sort of thing accountable.”

“I think it’s a game changer in a few respects,” Marwell added. “I think you know as well as we know that a lot of folks knew about this, and certainly those in the IT industry were very well aware of what was going on. They were sitting, watching, waiting to see what sort of action all this would yield. So I think from an overarching perspective, a strong deterrent message is being sent. If for no other reason, I think that makes it a game changer.”

“Look, to get this competitive edge, for Infosys to do what they did, others, I think, followed suit,” Marwell said. “And in following suit, it became a systemic issue, not only within Infosys, but, as far as we can tell and see, and as others have brought to our attention, it seems to be a systemic problem with the IT industry.”

Shamoil Shipchandler, Assistant U.S. Attorney in the Eastern District of Texas, who was instrumental in negotiating the settlement on behalf of the U.S. government, said the case enabled him and his colleagues to gain a far better understanding of the visa abuse issue.

“We understand the ins and outs of this, we understand what’s right and what’s wrong,” Shipchandler said. “Given that level of understanding, I think it helps inform what we can and can’t do. I think you’ll certainly see that our efforts and scrutiny have changed, and I think what you’ll also see is companies themselves will take some actions to police themselves on these grounds.”

Shipchandler agreed with his colleagues on the “game changer” question. “If you want to characterize ‘game changer’ as being whether it will cause other people to change their behavior, I think the answer is yes, it has to,” he said. “Infosys cannot have come up with this on its own—there have to be other people who are doing the same thing. And if they look and see that one of the largest companies in the world is being held accountable for its conduct, they must understand that they would be no different.”