Tech Pros in Hollywood Saving the Jobs of the Future

Technical professionals and digital artists will appear at the Oscars to call attention to foreign subsidies that are crushing the growth of the visual effects industry. The event is being billed as the March in March. It comes after a similar grass-roots protest drew more than 400 people at last year’s Academy Awards. 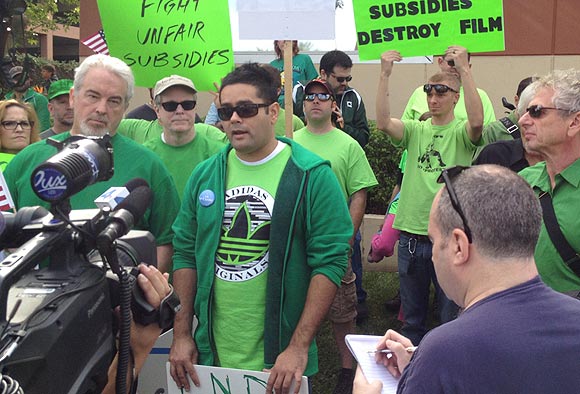 “We’re trying to focus on the destructive impact of the subsidies race,” Daniel Lay, who writes the influential blog VFXSoldier, told TheWrap. “We want to broaden it to include musicians and grips and others who are being drastically effected."

According to VFXSoldier, "The visual effects industry is relatively young but the top box office grossing films of the last 30 years were driven by an abundant amount of visual effects. So were the top 100 films of all time."  Yet this embryonic industry is being stunted in it's development by studio executives who hire specialized shops to create these effects, often using tax incentives offered by Canada, New Zealand and the UK to re-locate this work temporarily.

These subsidies are creating a fleeting industry abroad that have no roots in these countries--like "pop-up Halloween stores," the industry disappears when the project ends.  Many Americans are forced to relocate to these countries temporarily, so it's not even making all these temporary jobs available for their local citizens. From my perspective, this turns out to be a trick against all and not a treat for any.

So visual effects workers are going to the Commerce Department and the U.S. International Trade Commission to show that an import is benefiting from foreign subsidies and therefore illegally undercutting a domestic industry.  "The federal government is obligated to automatically slap a punitive tax on that import," according to David Sirota.  Sirota posits this tactic could be used to stem offshoring too.

These techies are smart and committed. Daniel Lay has expressed his perseverance by stating, " I’m not going to leave this industry without attempting to help fix the issues that are facing my friends, colleagues, and their families."

If you're in the LA area, please attend this rally. Details here.