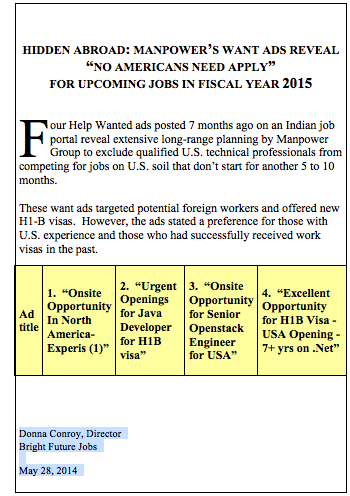 Donna Conroy, Director of Bright Future Jobs and author of Hidden Abroad explained, “Most Americans believe the nature of the tech industry is so fast-paced that staffing projections cannot be adequately foreseen.  However, these Manpower ads illustrate that U.S. tech employers determine labor needs 1-1.5 years ahead.  This gives them plenty of time to seek Americans first.  This boycott, combined with educating technical professionals on Equal Opportunity and other employment laws, will force the industry to change their ways.”

The boycott will continue until Manpower, IBM and Infosys demonstrate employment practices that follow EEO laws prohibiting race, gender, age and national origin discrimination for upcoming jobs in Fiscal Year 2016.  Recruiting for these job openings will start in the last quarter of 2014.

Kim Berry, President of the Programmer’s Guild added, "U.S. workers should have the first shot at U.S. jobs.  Companies hide these discriminatory practices with false accusations of a talent shortage.  The only shortage in the tech industry is fair and ethical recruiting and hiring.

Les French, President of Washtech said, “These companies have large contracts in the Seattle area to fill jobs in the tech industry.  Following EEO laws guarantees a pathway to upward mobility and prevents income inequality in the region.

The report analyzed four Help Wanted ads posted on an Indian job portal between October through December 2013 by Manpower Group’s wholly owned subsidiary, Experis IT India.  These jobs won’t start until October 2014 through March 2015 in the U.S.  The want ads targeted potential foreign workers and offered new H1-B visas.  However, the ads stated a preference for those with U.S. experience and those who had successfully received work visas in the past.

Bright Future Jobs could find no comparable ads on U.S job portals during this period.

These ads offered positions at “any of the experis delivery centers (portland/virginia/michigan) or any of the client locations in usa.”  Three rounds of interviews would start in November 2013; “2 rounds will be from US.”  One ad explained, “experis will send a conditional offer letter which will be tentatively by end of march ("subject to visa approval" will be mentioned in that letter).”  Those hired “would be expected to relocate to usa anywhere between october 2014 - march 2015.”

All ads stated successful candidates would be working for Experis North America and “all expenses related to your visa filing would be taken care by manpower.” Indian job seekers were assured that “ManpowerGroup would be filing for your H1B visa by April, 2014.”

Employee rights attorney Michael F. Brown said, ‘If employers with visa-worker-geared ads hire highly disproportionate numbers of visa workers compared to qualified Americans available, or if they mistreat Americans because of their national origin, then there may be violations of discrimination law.”

Rajiv Dabhadkar, Director of NOSTOPS, a national tech advocacy organization in India, is supporting the boycott.  Dabhadkar explained, "Indian employers exhibit a strong preference for local talent for jobs in India--why don’t companies in the U.S. do the same? This will protect the Indian foreign workers from the accusation of displacing Americans. Indians were not put on this earth to displace Americans, but Manpower's recruiting efforts show this is their plan."

Dabhadkar continued, "This segregated recruiting opens the door to unscrupulous agents to advertise jobs that do not require any specific technical skills and poach innocent Indian workers, making false promises.”

Current and previous events leading to this labor boycott include:

About Washtech
WashTech, Local 37083, is a union for high tech workers and part of the Communications Workers of America.
Les French, President
lcfrench@washtech.org
425-590-9747 (w)