Chicago, IL (PRWEB) July 05, 2012--One hundred job ads posted on Dice.com, a US high-tech job portal, were published today in the report, “No Americans Need Apply”: 100 Want Ads Exclude Americans From US-Based High-Tech Jobs by Bright Future Jobs, a group of high-tech professionals busting the myth that Americans can’t cut in science and technology. They are demanding that Dice.com remove these ads, which may involve multiple legal violations of discrimination law for a U.S. citizen job applicant who is bypassed based on his or her national origin.

“Until these companies go to EEO-Rehab, Dice must step in and remove all job ads that even have a hint of discrimination, “ said Conroy, author of the report and Director of Bright Future Jobs. 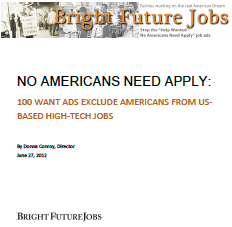 The report shows ads excluding Americans on Dice.com were peppered with an alphabet soup of visa terms to attract foreign citizens on work visas using US Citizen and Immigration Services (USCIS) codes for these programs.

Bright Future Jobs used these USCIS codes as search criteria and found hundreds of such job ads on Dice.com during January 10 through March 28, 2012. The report compiled 100 of these ads containing USCIS terms for non-immigrant visa workers.

According to the report, employers used codes for foreign students who’ve just graduated from college (OPT) or are still in school (CPT) right in the title of the job ads such as “OPT Jobs” and “Hiring OPT Consultants for Training and Placements.” Thirty-seven (37) of the 100 job ads had no IT terms in the title—only codes for non-immigrant visa workers.

“Now, for the first time, Americans will be able to see how they have been shut out of a major segment of the US high-tech job market—without even realizing it!” declared Conroy.

The report reveals that employers were even seeking foreign nationals holding obscure non-immigrant work visas, such as L-1, for foreign employees temporarily transferred into US jobs and L-2, their spouses or children. An ad featured in the report from PeopleCorp in McLean VA has advertised for these workers, along with targeting foreign students (OPT/F1), business visa holders (B1) and spouses of H1-Bs (H4). This ad is currently running with the phrase, “We are currently sponsoring H1B visas for candidates who are currently on L1/ L2 / B1 / H4 / OPT / F1." PeopleCorp is offering free training and accommodation, along with green cards, in this ad.

According to US Citizenship and Immigration Services (USCIS), none of these company-sponsored visa programs or university-sponsored work permits requires companies to seek American talent first. Business and H-4 visa holders are not allowed to work in the US, according to the USCIS.

Of the 100 ads excluding Americans compiled by Bright Future Jobs the report shows:

Industry-wide Discrimination Harms America’s Tech Future due to Cyclical Unemployment Amongst Americans & Visa Holders
“The public is led to believe that companies can’t find Americans to fill high-tech jobs when, in fact, they are not searching for Americans—as these ads show,” said Conroy. This closely guarded industry secret has been damaging America's technological promise, especially in Silicon Valley. According to the San Jose Mercury News, Silicon Valley in 2008 had fewer Black, Hispanic and female IT professionals than in 2000.

While the US continues to have an overabundance of experienced, highly-skilled American IT professionals and new science and technology grads whom the US has paid dearly to educate, a disturbing fact is revealed in the report—foreign nationals may also have high rates of unemployment. A number of ads in the study mention temporary periods of unemployment, or offer non-existent jobs to the targeted foreign citizens. Employers advertised free lodging in 27% of the ads, presumably for those foreign nationals awaiting jobs. More than half of entry-level job ads offered free accommodation in a company-owned “guest house.”

The report shows twenty of the 100 ads excluding Americans only gave promises of employment with phrases such as, “Will help you in getting job”, “We will give 100% support to find the jobs”, and “We will provide job assistance.” In an effort to place these foreign nationals in the highly competitive temporary job market, these companies also advertised résumé services and mock interviews.

The report comes out a time when Infosys, an Indian outsourcing giant, is under allegations the company resorted to visa fraud and President Obama’s re-election campaign has been hitting Mitt Romney hard for profiting from companies involved in shipping jobs overseas.

Senate Bill Will Prohibit Excluding Americans In Job Ads
Senator Dick Durbin (D-IL) and Chuck Grassley (R-IA) will re-introduce the H1-B & L-1 Reform Act later this year to prohibit such exclusionary advertising for the purpose of recruiting foreign nationals using the H1-B program. The act would also require companies to seek American talent first by posting the job opening, with salary offered and contact information, on the Department of Labor (DOL) web site for 30 days so US applicants can apply. Bright Future Jobs is urging quick passage.

“New H1-B visas for Fiscal Year 2013 have been exhausted. Media reports conclude this shortage reflects a shortage of US talent. However, as the ads in this report illustrate, it actually reflects a shortage of companies that seek American talent and follow EEO recruiting and hiring guidelines to fill their US job openings, “ explained Conroy.

The report is asking for emergency legislative and regulatory action to prevent employers from exclusionary advertising using all temporary visa and work permit programs.

Where These Job Openings Were Located
New Jersey had the most discriminatory job posting with over one quarter of the total (26), followed by California (11), Michigan (9), Texas (8), Illinois and Virginia (7), New York (6), Pennsylvania (5), Georgia and Ohio (4), Massachusetts (3) and Washington, DC (2). Connecticut, Delaware, Iowa, Maryland, Missouri, North Carolina, Nebraska and New Mexico had one discriminatory job ad each.

Who We Are
Bright Future Jobs is a tech advocates organization dedicated to counteracting claims that Americans can't do science and technology. We lobby to require employers to seek local talent for US job openings before recruiting abroad.

Our exposure of federal government documents declaring that the H-1b law's intention is to bypass the US workforce resulted in the introduction of the bipartisan Durbin-Grassley "H-1B and L-1 Visa Fraud and Abuse Prevention Act of 2007". We were instrumental in securing the passage of a Cook County resolution urging passage of the Durbin reform bill in September 2007.

Donna Conroy is an IT professional who has worked in education, government and the private sector. She has been quoted in Businessweek, CIO Magazine, Computerworld and appeared on Dan Rather Reports on the impact of corporate visa programs and high-tech jobs.