Let's be the Home of the Brave again

Our nation's workforce and new grads are diverse, talented and abundant.  Yet tech giants falsely accuse women, minorities, older workers--in order to divert the public's attention away from their discriminatory recruiting and hiring practices. 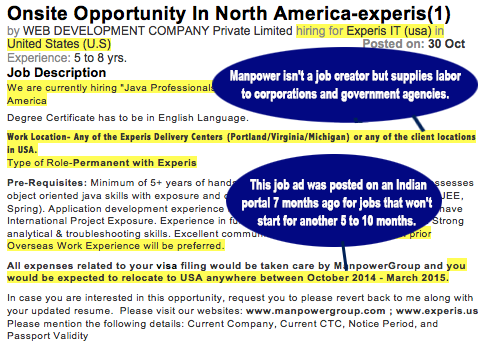 This pattern has emerged:

The Department of Justice (DOJ) caught IBM posting “No Americans Need Apply” job ads.  One was for a job in Boise, Idaho.

Infosys, a global IT services company, is facing a lawsuit alleging national origin discrimination.  According to the laws suit, 90% of their employees are South Asian. Even their own EEO reports show this!

Manpower, IBM and Infosys must start accepting applications from qualified Americans in a fair and ethical way--it's that simple. We'll call off the boycott when we see ads like this--recruiting American tech pros for jobs 18 months in the future.

Yes, I will join and support this national effort to return to Equal Opportunity and the American Way: