The Department of Justice has leaked to the Economic Times of India that similar investigations are underway that resulted in a historic $34M fine levied on Infosys last last week.  "There are offshoot investigations underway to look for similar misdeeds at some other companies," Karl Rusnock, a spokesman for the agency's division in Plano, Texas, told ET." 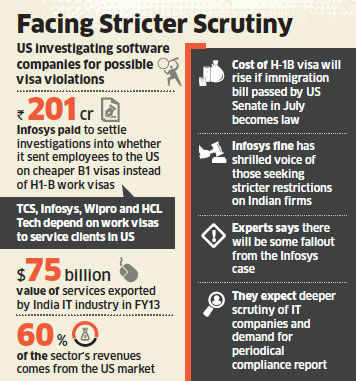 ohn Bales of the Eastern District of Texas, where Infosys was indicted told Reuters, "We've learned a lot in the case, and we're going to use that knowledge."

Senator Grassley (R-IA) also commented to ET that, "Some companies are finding creative ways to subvert the H-1B visa programme and bring in foreign workers to the detriment of American workers. Corporate whistleblowers reveal that too many companies appear to be pushing the envelope and ignoring the intent or spirit of the law," Senator Chuck Grassley said in a statement hours after the Infosys settlement.

Make no mistake: this is an American story.  American techies and government authorities are now stepping up to the plate to stop this.  Early on, Indian techies kept telling me that this had to be solved by Americans, a position I could not understand.  What they have always argued to me has now come to pass.